In this year of the 75th Anniversary of the Battle of Arnhem, Keevil’s Annual Service of Remembrance will be held tomorrow 7th September 12 noon at Stocks Green, led by the Rev Dr Rob Thomas.

This short and simple service has its origins in the 50th Anniversary of D Day and the Arnhem Operation, which was a remarkable village event with Airmen, Ground Crew, Glider Pilots and Airborne Infantry arriving from all over the world, and concluded with the dedication of a Memorial Plaque at Stocks Tree, unveiled by the ex-Glider Pilot Bill Higgs. Since then a service has been held every year and continues to be a part of Keevil village life. It is important that the village continues this simple service for what it represents.

A party of ‘Sappers to Arnhem’ comprising both serving and ex Royal Engineers, have cycled to Keevil for the last 10 years as part of their continued fund raising on behalf of the Help for Heroes appeal. Whilst Gerry Taggart and a good number of his fellow Sapper cyclists will again be present at the 2019 Keevil Service of Remembrance, this 75th Anniversary of Arnhem may well be their final appearance as a group – so please come and support them tomorrow. 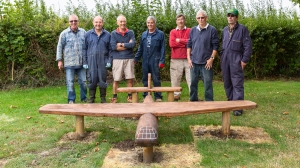 After the service the cycling Sappers go off on a long cycle ride around the villages, and lunch, but they will return in the afternoon to visit the newly installed Horsa Glider seat on the Banfield Recreation Ground.

This year saw the last major commemorative event to be held at Paulton. This service remembers the 21 Sappers from the 9th Field Company (Airborne) Royal Engineers and 2 pilots from the Glider Pilots Regiment, who lost their lives on Sunday morning 17th September 1944, when their Horsa Glider RJ113 crashed into a meadow called Double Hills, in the village of Paulton, Somerset. These were the first casualties of the Battle of Arnhem – Operation Market Garden. They had earlier taken off with their tug aircraft, a Stirling bomber, from RAF Keevil.

You can see a gallery of images, including as David Bodman lays the wreath on behalf of Keevil, and pages from the commemorative booklet, here…

Once again we are indebted to Margaret Bodman for producing superb wreaths for both Keevil and Double Hills, they are beautiful and greatly appreciated.

We’re always looking for news and pictures of village activities, so if you have something to talk about, please get in touch via the Contact Form here.

You must not use our website for or in connection with unlawful, illegal, fraudulent or harmful activity.

This website is managed by and for the villagers of Keevil; unless specifically stated otherwise, views expressed are not those of the Parish Council who have their own website here.

The webmasters are not responsible for the content of material belonging to other organisations, and accept no responsibility for any loss or harm howsoever caused.