2021 Service to be held on Saturday 4th September, 12 noon at the memorial plaque at Stocks Tree, led by Canon Richard East

Every September for twenty five years, villagers and friends have gathered at Stocks tree for a short Service of Remembrance, to honour the memory of all those brave men who flew from Keevil airfield as part of the D-day and Arnhem operation. Many were injured and sadly many never returned.

In 2020, due to the coronavirus pandemic, the service did not take place. Nevertheless, RAF Keevil remembrance was not forgotten. David and Margaret Bodman, and Myra and Karl Link, were joined by Ray and Pauline Ward for a little gathering; and two of our awesome Cycling Sapper friends still made their own informal trip to lay a wreath at the Memorial Plaque and, we are reliably informed, check out the lunch menu at The Barge, which we understand remains more than up to standard! Thanks for coming, and to Ray Ward, Chris and Ian for the pictures 🙂

The 2019 service took place by the memorial plaque at Stocks Green at noon on Saturday 7th September, led by the Rev Dr Rob Thomas. After the Sappers returned from their cycle ride and lunch, they visited the newly installed Horsa Glider seat on the Banfield Recreation Ground during the afternoon.

This short and simple service has its origins in the 50th Anniversary of D Day and the Arnhem Operation, which was a remarkable village event with Airmen, Ground Crew, Glider Pilots and Airborne Infantry arriving from all over the world, and concluded with the dedication of a Memorial Plaque at Stocks Tree, unveiled by the ex-Glider Pilot Bill Higgs. Since then a service has been held every year and continues to be a part of Keevil village life. It is important that the village continues this simple service for what it represents.

2019 Gallery by Sarah J Dow, click to see full size or view in a slide show 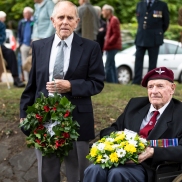 Gallery of images from the 2017 Service by Sarah Dow, click on image to view full size. 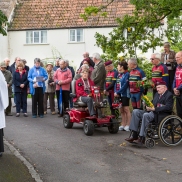 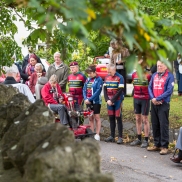 At the 2017 service on Stocks Green 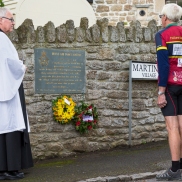 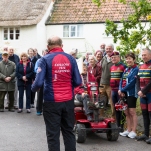 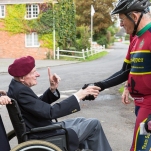 Preceding the Keevil Remembrance is the Double Hills Memorial Service, which remembers the 21 Sappers from the 9th Field Company (Airborne) Royal Engineers and 2 pilots from the Glider Pilots Regiment, who lost their lives on Sunday morning 17th September 1944, when their Horsa Glider RJ113 crashed into a meadow called Double Hills, in the village of Paulton, Somerset. These were the first casualties of the Battle of Arnhem – Operation Market Garden. They had earlier taken off with their tug aircraft, a Stirling bomber, from RAF Keevil.

The 2019 commemoration held on 1st September, on the 75th Anniversary of Arnhem, was the last major memorial of its kind, although an informal act of remembrance will take place in future years on the first Saturday in September for those wishing to pay their respects.

They did not die in battles din,
Of worlds renown,
Or medals win,
But gave their lives for you and me,
So that we and the whole world might be free.

Ruby Bowell – A Paulton nurse who, in 1944, attended the scene of the Double Hills disaster

Gallery of images from the 2019 Double Hills commemoration, including as David Bodman lays the wreath on behalf of Keevil, by Sarah Dow, click on image to view full size. 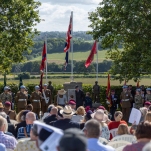 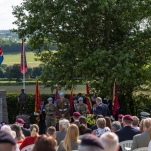 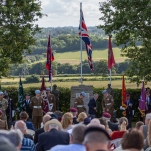 The Memorial at Double Hills, Paulton, 2019 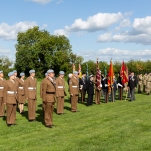 The following images are pages from the 2019 commemorative booklet available to those who attended the service in Paulton, and contains an incredible amount of history, images, interviews and tributes by and for all those involved with Double Hills and the Arnhem Memorial. Click on one to read full size and then scroll through. 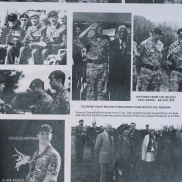 A party of ‘Sappers to Arnhem’ comprising both serving and ex Royal Engineers, have cycled to Keevil for the last 10 years as part of their continued fund raising on behalf of the Help for Heroes appeal. Whilst Gerry Taggart and his fellow Sapper cyclists will again be present at the 2019 Keevil Service of Remembrance, it may well be their final appearance as a group. Can we appeal for as much support as possible for this short event, which again is dedicated to Alan Thomsett’s memory, for it was he who was central in organising these acts of remembrance for so many years.

How delighted we were to welcome members of Team Sapper back to Keevil for the tenth year running, for the annual Service of Remembrance at Stocks Green.

Gerry has kindly sent us a small collage of Team Sapper and supporters having a busy weekend; riding, running and swimming! Team Sapper 15_16 Sep 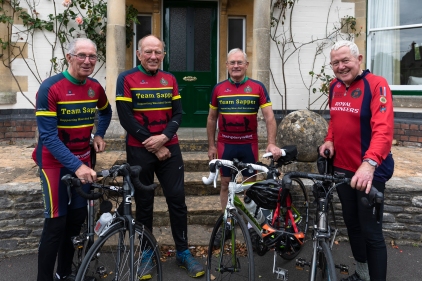 At the 2017 service a commemorative Plaque engraved by Keith Bunting, using artwork designed by Randolph Vaughan, was presented to Team Sapper by the Chairman of the Parish Council, Andrea Hunter (see 2017 gallery above).

Here is the letter from Gerry Taggart, President of Team Sapper, in response:

Gerry Taggart of Team Sapper writes… “The “senior” members of Team Sapper decided that the Plaque would be better looked after and seen by more people if it were hung at the Squadron’s camp in Woodbridge, Suffollk. it was presented at an event called the Third Thursday Luncheon Club, which is a gathering of Airborne Engineer officers and friends twice a year. Ian McGilll organises it and Mo is one of the lady guests, who has attended, with me, since the 1980s. This is the short speech, which I gave at the lunch:”

Many of us have been involved in the annual “Double Hills” Commemoration at Paulton, Somerset.

In 2009, some of us rode 350 miles on the Help for Heroes Bike Ride. We met other sappers and “Team Sapper was formed.

Later that year, we decided to ride between RAF Keevil, Wiltshire (where the fated glider took off from) and Paulton. Every year now we ride at Keevil and join the committed people there to lay a wreath to airborne soldiers and airmen who didn’t return. We are made to feel like members of the Village.

In September 2017, Keevil Parish Council gave us this specially made copper plaque. To make sure that this special item has a home, what better place than The Squadron.

One thought on “RAF Keevil, Double Hills, & the Sappers”

We’re always looking for news and pictures of village activities, so if you have something to talk about, please get in touch via the Contact Form here.

The village website is intended as a helpful and informative village resource. If leaving a comment, please be kind, considerate and respectful of  the views of others.

You must not use our website for or in connection with unlawful, illegal, fraudulent, defamatory or otherwise harmful activity.

This website is managed by and for the villagers of Keevil; unless specifically stated otherwise, views expressed are not those of the Parish Council who have their own website here.

The webmasters are not responsible for the content of material belonging to other organisations, and accept no responsibility for any loss or harm howsoever caused.

See more about us here